A beard, a bike and a cycling world record: Reynolds Q&A with Sean Conway

Sean Conway truly is a man of steel. On the 11th of May 2018, the 37-year-old extreme adventurer from Cheltenham took the world record for cycling across Europe (a mere 3980 miles) in 24 days, 18 hours and 39 minutes, smashing the previous record of 25 days, 3 hours and 38 minutes.

And that’s a wrap. It’s taken me 6 years, 60,000 miles and 3 failed attempts at a cycling world record but today it finally happened. 3980 miles across Europe world record in 24 days. 18 hours. 39 minutes. I think I may lie down now. #europecyclerecord pic.twitter.com/NVvIsHNdW6

But the journey wasn’t easy. After a number of setbacks, it would have been easy to throw in the towel along the way. We caught up with Conway several weeks after finishing the journey to talk about the behind-the-scenes struggles, the planning, the bike behind it (of course) and the countless hours of hard work in the saddle that went into achieving the world record.

The first question has to be about how he felt in the run-up to the attempt, which was his third go at this particular world record. His attempt in August 2017 ended after 800 miles when he tore a quad muscle in his leg. He admits to feeling nervous, having failed before. However there was a focus on taking things back to basics this time around, and a conscious decision to “control what you can.”

Was there a highlight? This question is met with a long pause and some wry laughter. After some thought, Conway tentatively says that seeing sunrise and sunset every day was a mood-booster, but… “At the time, nothing felt exciting.” The temptation to quit was ever-present. He was aware throughout the journey that “the margins were so tight”, and in the first week, with 1000 miles down and his body still adjusting, it was hard going. Over the next couple of thousand miles, he pushed himself to build up a bank of time, but by the time he hit Russia, he was feeling the strain, and to add insult to injury, he ended up riding into a persistent headwind for the last thousand miles.

What about afterwards? After the planning, the training, the highs and lows, how did he deal with it? Conway explains that, having done other world records, he has got past the “nothing to do” stage and keeps himself busy. He writes his notes from the journey up and focuses on recovery.

The conversation naturally moves to the Stanforth Conway bike he rode to a new world record. Conway had long wanted to create a fast touring bike, finding traditional tourers a little too heavy for the long mileage and need for speed involved in a world record attempt. Meanwhile, road bikes are not suited to the varying road surfaces, long distance and weight of the baggage that must be carried.

Conway worked with Simon Stanforth of Stanforth Bikes to design a fast touring bike built from Reynolds 853 tubing for this attempt. With a hardy frame and race geometry, 853 lends it a lightness unusual for a touring bike. Conway also describes the frame as notably “comfortable”, which, of course, translates to added speed in the saddle.

What now? A question Conway has no doubt fielded repeatedly since finishing his world record. He laughs. After 6 years and around 60 thousand miles, this record has taken up much time and energy. Recovery is the focus for now, but, he adds, “watch this space…”

What about advice on facing down challenges? As a man who holds multiple world records, Conway is well-versed in preparing to do what ‘can’t be done’. He immediately comes back with; “prepare.” “You don’t want surprises. Think of every eventuality.” Putting in the hard work – in this case, miles, is also key. “Keep pushing – in training, and beyond.”

He closes with a reminder to always keep going. “In training you can get disillusioned. You only see the benefit afterwards.” After almost 4000 miles of suffering, we’re inclined to take his advice on that.

Simon Stanforth on the record-breaking bike

Following Reynolds Q&A with Sean Conway , Stanforth Bikes provided us with more details on the world record-breaking bike. According to Simon Stanforth, they chose “each individual tube for a reason, based on their diameter and thickness to ensure the right balance between comfort, speed and the best handling for touring” when designing the Stanforth Conway. The main triangle uses mid-gauge 853 air hardening and heat-treated steel, rather than mountain bike/ATB spec or road 853 spec. This is essential, because as Stanforth explains, while this is a lighter tourer, the strength of mid-gauge helps deal with the gravel and rough roads you’re bound to encounter on a long-distance journey.

Meanwhile, the down tube has a wider diameter than the top and seat tubes “to ensure rider power is channelled to the road.” The stiffness helps the tracking of the wheels, front to back, to “increase handling predictability through a corner.”

The geometry works hand-in-hand with the tube selection, with the wheelbase, trail and tube diameters ensuring a steady ride and good predictability in cornering.  Stanforth adds, “The combination of the top tube length, seat angle, head angle and trail have been designed to give a comfortable but fast riding position for long hours in the saddle.”

For more on the bike, visit the website, which also has a full account of the world record attempt and backstory. 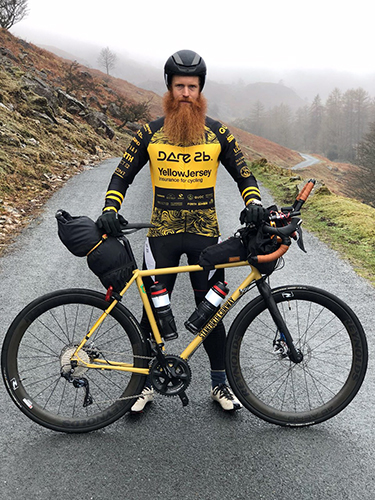 With thanks to Sean Conway and Simon Stanforth for their input into this article.